Strength and muscle mass increases naturally during adolescence and early adulthood. However, around the age of 30, strength begins to decline.  This decline is slow and for all practical purposes undetectable over the first couple of decades.  However, by 50 years of age strength starts to decline at an accelerated rate resulting in a 15 to 20% decrease over the next 20 years.  At approximately 70 years of age, the rate of decline accelerates once again to about a 25-30% loss per decade. This decline in strength parallels a loss in muscle mass caused by a reduction in both muscle fiber size and number (1-3).  Although other factors for the decline in strength have also been implicated, such as a reduction in neuronal recruitment of muscle fibers, the major reason for the loss in strength appears to be due to a loss in muscle mass.

The loss in strength with age is not benign. As most individuals realize, loss of strength is associated with frailty, weakness, reduced mobility, functional disabilities and increased injury due to falls.  However, recent research suggests that declines in strength are also associated with an increased risk of cardiovascular disease, type 2 diabetes, some forms of cancer, other metabolic disorders and all-cause mortality (4-6).  Therefore, it is important to understand the reasons for muscle loss with age, and develop appropriate strategies to combat this loss.

The recommended daily allowance or RDA for protein is 0.36 g per lb. of body weight, and represents the quantity of protein that should be consumed daily to meet population needs and to prevent deficiency. However, factors including physical activity pattern, body type and age can have a significant influence on protein need.  Research now suggests that as individuals approach 45 to 50 years of age there is an increased requirement for dietary protein. In fact, once one reaches middle age, the requirement for dietary protein increases to between 0.55 to 0.68 g of protein per lb. of body weight (12).  For someone weighing 150 lb. this would mean that daily protein consumption should be 85 to 100 grams of protein. 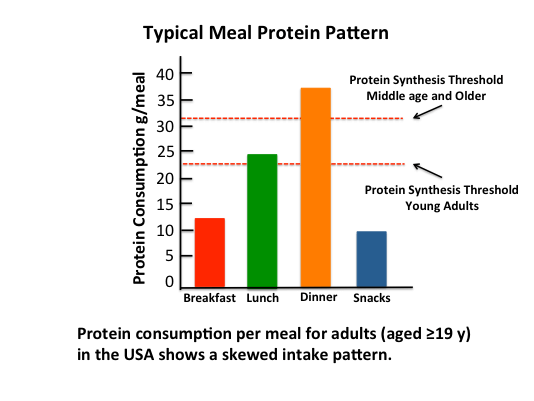 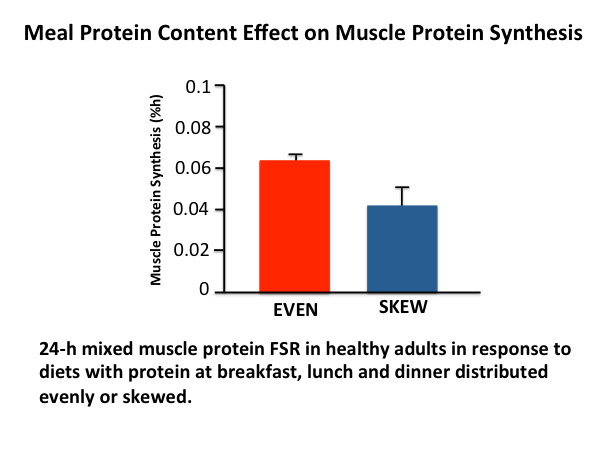 Late night protein snack. Consuming a protein snack such as Greek yogurt, turkey breast, low fat chocolate milk or a protein supplement before bedtime can also be beneficial.  During sleep there is generally a loss of muscle protein as muscle is broken down and the amino acids released are converted by the liver to glucose in order to prevent blood glucose from falling (18). Recent research indicates that consuming a protein supplement before bedtime will promote muscle protein synthesis while sleeping, and increase whole body protein balance in the elderly (19). Moreover, participants in a 12-week resistance exercise training program who received a pre-bedtime protein supplement were found to had significantly greater increases in muscle mass and 20% greater increases in total body strength than participants that received a non-caloric placebo (20).

The decline in muscle mass and strength with age is pre-programed into our DNA.  However, the rate of decline is heavily influenced by dietary considerations. With age the ability of dietary protein to activate muscle protein synthesis is significantly reduced, thereby requiring an increase in daily protein consumption to maintain a physiologically relevant protein synthesis. The most effective means of increasing daily protein consumption is to increase protein intake across each meal of the day. It is also important to consume an amount of protein that is sufficient to activate muscle protein synthesis following each meal.  Middle age and older adults should consider consuming about 30 to 35 grams of protein at each meal.  Finally, consuming a small protein snack about 30 minutes before bedtime can stimulate muscle protein synthesis while sleeping as well as help improve whole body protein balance. 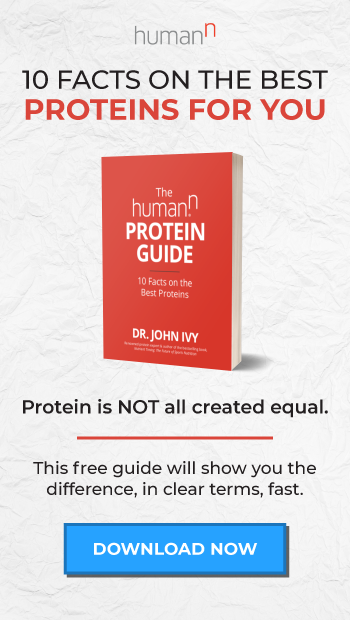