The inaugural Tough Mudder X took place last month, and if you were like us, you had a lot of questions about it. What is it? Who was there? What made it so special? Well, we sat down with three of our team members (Yancy Culp, Ryan Atkins, and Lindsay Webster) who happened to be there competing to hear what they had to say. Photo credits go out to @YancyCulp and @GOATtough. 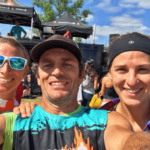 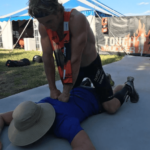 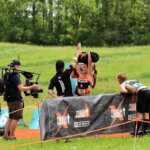 For those of us that weren’t there, what impressed you the most about TMX?

Ryan: It was a dynamite event. I was impressed by the way the course was put together and the professionalism of the event staff. I was also blown away by how encouraging and excited everyone was to be there. In the end, we are all athletes and we all love testing and pushing ourselves. TMX really brought that out.

Yancy: Tough Mudder put this epic event together in a short amount of time, broadcasted it well, pulled together a group of athletes (some of the absolute best in their respective sport) from the world of OCR, CrossFit, American Ninja Warrior, Olympians, etc.  They also put together a course that required an amazing skill set and in the end we saw OCR and OCR/CrossFit hybrids take the top two spots on the male and female side.  Overall, what impressed me the most was how well everything came together.  Props to the Tough Mudder Team.

Lindsay: I think what impressed me most about TMX, besides Tough Mudder putting the whole event together from concept to finale in under 6 months, was the ingenuity of the event. Nothing like this exists in either OCR or CrossFit, and it really brought both worlds together. A lot of people who don’t do either OCR or CrossFit consider them essentially the same sport, but this event really brought to light how different both sports are, and created a whole new kind of athlete who would excel and take the top podium spot.

@tough_mudder TMX event was a complete success. I raced my heart out in the prelims AND the finals. FINALS: In a last ditch kamikaze effort to catch @huntthesheriff , I slipped off the slip wall, and almost succumbed to a hard charging @kevinrig18 . I managed to hold onto 2nd place! What a race. @beetelite @goattough @merrelloutside

What were you excited to see or experience as you headed into the race?

Ryan: I was most excited to see how I stacked up to the crossfit and ninja warrior athletes. I thought we OCR athletes would do well, but I had no idea about the dominance we would show.

Yancy: As an OCR Coach to many high level athletes, my number one reason for racing this event was to get my body and mind all over the course.  Nothing is black and white in the sport of OCR and modern day functional fitness.  New curve balls are being thrown at the athletes almost daily.  Short courses, long courses, different obstacles, different obstacle design, different combinations of working functional fitness in with OCR, different geography, etc. I could go on for days about the epic variety the sport of OCR provides.  Specialization is just not an option for many athletes in the sport right now.  Most top athletes are trying everything until they slowly work their way toward a little more specialization.  As a coach I find that I’m able to serve my clients with the best level of programming when I get out and experience the races myself.  I loved the race experience at TMX and the experience allowed me to get my coaching gears turning and this is what was the most exciting for me.

Lindsay: I was most excited to see who would win an event like this. I had my hunches and some names in mind for top males and females, and my guesses were pretty spot on. To excel at this event, you need to be strong and have some solid muscle mass to do the lifting. You need to have some CrossFit experience so you know the fluidity of the movements. But, you need the grip strength of an OCR athlete. You also need to be a good runner, so too much muscle mass isn’t a huge benefit. You need to have a good cardio engine, since this event is much longer than your typical WOD and you need to get through two of them in one day – both the preliminary and final. Basically, you have to be an all-around beast 😉

What ended up challenging you more than you expected?

Ryan: I was most challenged by the pace and intensity of the race. I’m definitely not used to going THAT hard for that short of a time frame. I felt strong throughout and was completely drained by the finish.

Yancy: It was the combination of CrossFit style functional fitness combined with challenging obstacles, and the short one mile distance that created a lactate threshold pounding fitness throw down unmatched by possibly any event that’s ever been put on.  Bodies were completely turned inside out and we saw some of the best athletes in the world pushing themselves harder than they ever have before.  Adding heavy lifting to the race early on proved to have a serious effect later in the race for some.  Especially in the area of grip strength.  Some athletes were falling off of obstacles they normally wouldn’t struggle with in a traditional OCR race.  I believe the event slightly catered to the OCR/CrossFit hybrids vs strict American Ninja Warrior or ANW/OCR hybrids.

The face you make when you're trying to clean something that's 80% your body weight 😂😂 Olympic lifters out there, I seriously admire you. Never stop testing your limits! #TMX #ToughMudderX #ToughMudder @tough_mudder @goattough @beetelite @marenasport 📷 cred Jim Campbell

Any parting thoughts on the overall TMX experience?

Ryan: TMX was the kind of event that you know is special from the moment you get there. One of those events that you will look back on and know you were a part of from the start. The diversity of athletes there looked like a melting pot of power strength and endurance. One where you have no idea whose strengths will come out on top. I’m excited to see more athletes start to specialize in this format.

Yancy: As a coach, I had an athlete in every single heat so I ran the course 9 times as a coach and 1 time as an athlete.  This is the only way you can log 25,000 steps in a day when you’re signed up for a race that’s only 1 mile long.  I’m really excited to see how the race looks on TV.  You’ll  probably see me flying around the course yelling and screaming as my clients were racing.  You’ll also probably hear me getting bleeped out as a I let a few words slip out during my journey around that course 9 times in coach mode.

Lindsay: Some athletes in this sport have been saying for a long time that OCR needs to become more spectator friendly. Well, Tough Mudder has done it with this event. There’s not a more exciting event to watch. I think this means it has a great chance of taking off as it’s own sport in the future, and it will create a whole new kind of athlete. If it really takes off, I think it will steal the title from CrossFit for “World’s fittest human!”

Life's a whole lot better when there's champagne involved!!! Thanks to @tough_mudder for putting on the amazing event and big congrats to all the amazing athletes who showed up to this crazy event! Thug love to my homies and sponsors @secondskingear @fitaid @beetelite #bicepswinraces #toughmudder #tmx #whenpigsfly

Don’t forget to tune in to CBS Sports on Sunday, September 3 at 4 p.m. to watch the Tough Mudder X Finals from the Twin Cities of Minnesota. 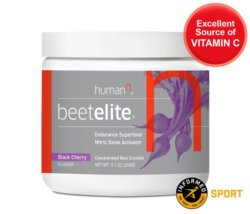 By: The HumanN Editorial Team Curious about the best ways to generate Nitric Oxide as an athlete? Dr. John Ivy breaks it down. Dr. John Ivy is a legend in the sports nutrition world and… Read more

By: HumanN Editorial Team  IFBB Fitness Olympia Champion Monica Brant has a 4-minute workout challenge for you to try at home. How many rounds can you complete in 4 minutes? For more workout challenges like… Read more

Workout with Your Pup by Andre Crews

Spending time indoors means we are all looking for new ways to workout at home. Check out how Andre Crews makes use of simple household items in this workout as well as his adorable workout partners!
Read more