This is the longest I’ve gone without competing. I always thought my passion was with the training, but now that I’m slightly removed, I can see now that I do love to compete too. To be honest, I’m not sure if it’s even about the winning (or not losing), or just the ability to push yourself to see the hard work and sacrifice pay off. Maybe it’s just having the opportunity to take a risk and see a result. I can see now that the promise of competition was the driver all along. And again, this has been the longest I’ve gone without competing. It’s only been 6 months, but it feels like an eternity. I’ve literally been competing in one thing or another since I was five. It started with soccer, baseball, and track which evolved into Division 1 track and field/cross country and then Division 1 soccer. Once out of collegiate sports, I went back to running pretty quickly. I entered many races and soon enough that led me into obstacle course racing. I competed professionally for about two years in OCR, and at the same time, I dabbled in CrossFit. It wasn’t until the end of 2016 that I finally went all in with CrossFit.

I dabble in a lot of different things, actually. I work at the University of Hawaii and co-own a small business called FIT Happy Hour. I went all in with CrossFit though. I surrounded myself with the most amazing team and pulled off a dream. Quite honestly, it was more of a dream than a goal, but it was amazing to see something materialize.  It reframed things for me because I proved to myself that anything is possible.

As crazy as it sounds, the 2016 California Regionals was my first ever individual CrossFit competition. It was an insane three-day competition with some epic highlights and also some huge disappointments, however it was fulfilling a dream.  I competed in a team competition after regionals, got back to training with the team, and then I hurt my back one day in my office basically doing nothing.  Only a month after regionals and I wasn’t able to do CrossFit.

At times I felt immobile, stiff, and in pain. I changed some lifestyle habits like not sleeping on my stomach and sitting even less, even though I already had a standing desk at home and at work.  However, I know this was a recurring issue because it was not fully resolved in the first place.  CrossFit was out of the question at this point, and I went through a cycle of feeling good then doing something to irritate my back. It was a simple, super frustrating loop.

Because of this, I refocused. I dove deep into a new endeavor. I didn’t dabble. I went all in. I spent the last few months building Catalyst, an eight-week fitness program for FIT Happy Hour.

FIT Happy Hour is a Kailua-based company focused on Functional Interval Training to improve mind-body strength, endurance, and coordination. We value movement quality over benchmarks. We pride ourselves on the scalability of our programming. The workout meets you where you are today. It can be done by a beginner or a high-level athlete. Recovery is just as important as the workouts, and this is built into any program we implement.

We have maintained a core group of members for the in-person fitness classes based on a foundation of community and camaraderie. While I love the competition of CrossFit, the FIT Happy Hour model is built less on competition and benchmarks, and more on sustainability and movement quality.

With Catalyst, our online eight-week program, we wanted to expand our little community. The program can start on any Monday and new members are added to our growing team from around the world. The program is modeled after our in-person classes with three workout days per week. The workout videos are all pre-recorded and intended to be done on Tuesdays, Thursdays, and Saturdays. Mondays and Fridays are “Do It Yourself” (DIY) Rest & Recovery days, while Wednesdays and Sundays are DIY Moderate Activity days. The entire program is available to anyone signed up. Anyone can do Catalyst on their own, but it is more fun to complete the program with a team full of people from around the world!

I am, what feels like, fully recovered. The timing of this was when we launched the website a couple weeks ago. Our first team just started Day 1 on February 26, and all I’ve been thinking about is “what’s next.” Back to running? I would love to compete in CrossFit again.  Where one door closes, another door opens.  I’m not sure what will happen, but wherever my efforts go, I’m going all in!

If you are interested in learning more about Lauren’s story and FIT Happy Hour, you can visit their newly launch site here or follow them on Instagram @FIT_HappyHour. 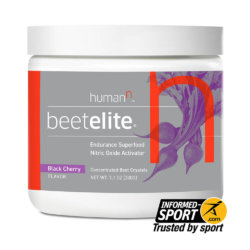 At HumanN, our first responsibility is to you, our customers. We were founded to help change lives for the better and exist to help support your efforts to feel your best and live your healthiest life. Read more

Jon’s Story: Before & After with Nitric Oxide Indicator Strips

Nitric Oxide is an essential molecule that most people over age 40 no longer produce enough of. Heart & vascular health tends to decline with age from Nitric Oxide deficiency. That’s why we developed Neo40. It is a clinically researched Nitric Oxide tablet that helps increase the production of Nitric Oxide in the body and helps support: healthy blood circulation, Artery vasodilation for healthy blood flow, and healthy blood pressure already in the normal range. Read more

For Angenette, a corporate and commercial attorney, thrilling adventures are a way of life for her and her fellow members of the Dare Divas. From sky diving to NASCAR racing, these ladies have done… Read more