Featured contributor Bob Seebohar, 2008 Team USA Olympic Sport Dietitian, provides a behind-the-scenes look at the life of a sports dietitian and coach during the 2008 Beijing Olympics. 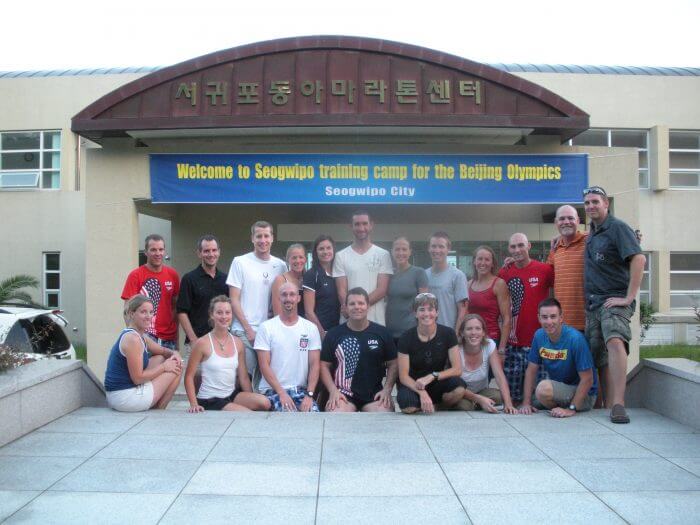 Prepping for an Olympic experience

I was honored to be named the 2008 Team USA Olympic Sport Dietitian.  I spent 5 weeks in Beijing before and during the Games at which time I wore many different hats.  Most notably, I spent 10 days with the Olympic Triathlon Team in their training camp in South Korea where I made sure that the food we ate met the individual needs of the athletes.  We stayed at a facility that had a kitchen and a chef that would cook meals for us.

The language barrier was difficult to navigate so I would find photos of food on the internet and take them to the chef so she could procure the foods and prepare the meals in the kitchen.

In addition to these nutritional duties, I also worked closely with each athlete and their coach to ensure that they were optimally hydrated.  I would take about 2-3 urine samples per day from each athlete and analyze them in my refractometer (which measures urine specific gravity).  Based on the daily results, I would work to improve or maintain and athlete’s hydration status through fluids, electrolytes, and food at the meals we were served.  Aside from all of my nutritional and exercise physiology duties, I also wore a coach hat as I was fortunate to be Sarah Haskins coach at her first Olympics. Whenever I had down time, I would spend it with her and her husband making sure her preparations were coming along well for her first Olympic Games.

When I returned to Beijing, I wore many different hats from helping set up the swimming pool (for our Olympic swimmers) on the university campus we were staying on to answering any questions that coaches or athletes had regarding nutrition.  Honestly though, much of a Sport Dietitian’s nutrition work is the first 3-3.5 years of the quad leading up to the Games.  Once on the ground at the Olympics, it is more maintenance and being there in case anyone needs anything.

Many people believe that a Sport Dietitian is there 24/7 with athletes but we spend years educating athletes and teaching them proper nutritional strategies to implement so when they make it to the Games, there is nothing different or too new for them.

Bob on the perception of a sports dietitian’s role with Olympic athletes.

Luckily, the USOC has a phenomenal food service department who I worked with behind the scenes leading up to the Games to source food and determine what foods we could ship to China.  The food service staff really made the magic happen on the ground as they set up our home base restaurant for athletes and coaches to eat at (instead of the Olympic dining hall) and maintained it by sourcing excellent food throughout the Games. It was better than a 5-star restaurant!

When I was at the USOC as a Sport Dietitian, they split my team into “sport folios” and I was assigned the endurance sports leading up to the Olympics. I did have an opportunity to work with other teams and athletes (Tae Kwon do, Weightlifting, Boxing, Sailing, Shooting, and a few more) but was mostly focused on all endurance teams and athletes.

The role of nutrition periodization

As I mentioned, the implementation of nutrition periodization is done starting in year 1 of a new quad as athlete prepare their 4-year journey to reach the Olympics. Each year is spent teaching the athletes different nutritional concepts and accounting for international travel within the scope of meeting their energy demands, weight/body composition goals and working closely with their coaching and strength coaching staff to ensure the nutrition plan is supporting the physical training plan.

The best part? Being a coach and a sports dietitian.

Looking back on my Olympic experience, being on the ground in South Korea with the Olympic Triathlon Team was a huge highlight for me since I was coaching one of the Olympians, I am a triathlete and I was able to relate with them quite easily.  After the triathlon event, I mostly took in the Olympic experience doing a bit of sightseeing whenever I had time (that wasn’t often), getting a behind the scenes tour of the Olympic Dining Hall (which was super cool!), helping set up training venues for other sports so they could train, and just being around in case someone needed a last minute Sport Dietitian.  As I mentioned, most of the nutrition work is done way before the Games so athletes are mostly on auto pilot when they arrive.  The nutrition team just made sure that all food and beverages were sourced way beforehand and provided the specific nutrients that all athletes needed.  Of course, some athletes and teams would never pass through our post while others frequented it quite a bit.  It depended largely on where their venue was located and how soon they arrived before their event.

It was definitely an experience that I will never forgot and one that I will cherish for the rest of my life.

If you ever meet Bob, you will have a hard time distinguishing between the coach, the athlete, and the sports dietitian because he is so passionate about all three. Growing up as a competitive soccer player and doing his first triathlon his sophomore year in college helped to spark his interest in training and nutrition. He is now a registered dietitian, exercise physiologist, NSCA Certified Strength and Conditioning Specialist, USA Triathlon Level III Elite Coach and a USA Triathlon Youth/Junior coach. Being an out of the box thinker, Bob also created the concepts of Nutrition Periodization and Metabolic Efficiency Training.

At HumanN, our first responsibility is to you, our customers. We were founded to change lives and exist to help you feel your best and live your healthiest life. It is our unwavering mission.
Read more

The Recovery I Needed

In March, after sustaining my fourth stress fracture in the past three years, I wrote that it was time to take a step back and re-evaluate – to stop “fighting the water.” I’ve fought like hell these past few years to try and keep myself healthy and running like I love to do. And while I was tired of fighting for many reasons, internally I knew I had one big fight left in me. Because there was one thing that I hadn’t tackled head on in a very long time: my eating disorder. Read more

Austin, TX – March 21, 2019 — HumanN, a leader in functional nutrition is thrilled to announce that its best-selling BeetElite has been awarded an Essential Supplements Award by Taste for Life Magazine! Committed to excellence,… Read more